The Lake District is made for mountain running and walking. The sheep have made the fells nice and runnable, there's loads of well-walked paths and the area is nicely compact, allowing for a zillion and one combinations.  Oh and its pretty accessible with plenty of opportunities for support. 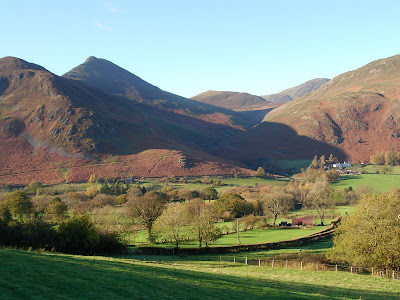 Of course the most famous long distance round of all is the Bob Graham, with thousands having completed the classic 24 hour circuit of 42 summits from Keswick.  But there's loads more possibilities and the ones described below are just those that I've personally completed or attempted.

The grandaddy of all long distance runs in the UK and by far the most popular 24 hour run.  Apart from the heathery miles out to Great Calva and back, the BG is a lovely line, linking much of the best of the Lakes' ridges.  You have to register beforehand to be eligible for the club and your certificate.  I've completed it three times within the 24 hours and once, a heartbreaking 3 minutes over the allotted time on my first winter attempt.

If you live in the Lake District, the Bob Graham route can become a bit familiar, and for those who have done it, what next? Does it have to be harder and is it possible to design a route in the Lakes that even approaches the BG for continuity and purity of line? This is my answer to that question. Its a 66 mile route that only shares 3 miles with the BG, being a logical round with no major out and backs. It is a true horseshoe over some of Lakeland’s big and little hills and was conceived to celebrate my 40th birthday with 40 peaks. Just don't treat your toes like I did mine - see picture from the day after.

The Wainwright Seven is a circular tour of each of the highest peaks in Wainwright's seven guides to the fells of the Lake District.  I set out one morning from Ambleside to make a training run for the Ultra Trail Mont Blanc Race.  It is well suited for this, being composed of substantial ascents and descents interposed by some flat or undulating valley sections.  Its different to the normal 'bump bagging' and makes a good day out, although I'm sure that Wainwright would have scowled at such racing over the fells.  Oh and I made it back in time for chips!

The concept is simple - follow Northing 102 due West from Shap Wells for over 50 grid squares, deviating no more than 200m either side and keeping as close to the line as possible.  The practice is not quite so easy with intimidating ups and downs, very loose scree, and without support, working out how you are going to get back.

This round was first conceived by Steve Parr in the 1980s and is a peak bagging extravaganza taking in all the 2500 foot tops in the Lake District over 2 days.  As far as I am aware, Steve is the only person to complete the route in his allotted 48 hours (he took around 43 hours). I developed shin splints and was a whisker away from not being able to walk at all at the end.  I completed but had taken so long to shuffle with my poles that I took 53 hours.  Its a pretty tough route which includes Pillar Rock, but its not the most natural line and may well entail two nights out.

This is a challenge conceived and completed by Chris Upson, an inveterate Marilyn bagger.  Marilyns are hills of any height save that they must require 150m ascent all round.  There are over 1500 of them in the England, Scotland and Wales, but this challenge is limited to 24 of them linked together in 24 hours.   you can choose any route you like and it doesn't have to start and finish at the same point.  I chose a slightly different route to Chris, partly in an endeavour to see if I could extend it by a peak.  Despite some of the hills being relatively small, its a pretty tough challenge of 75 miles and 29000 feet of ascent, and I failed on my only attempt, although I did get very close.

The name says it all really - a circular tour of the 4 highest peaks in the Lake District , starting and finishing in Keswick.  The walk is completed every year in June as an event organised by the Ramblers, but clearly you can do it anytime you want to.  I have to say that its not my favourite, with far too many valley miles and some rather dull terrain.  Its very much a poor cousin of the Welsh 3000s which is a splendid day out, but it's within the abilities of most fit walkers and I found a winter round on a very windy day to be a very real challenge.  In the summer its a rather different affair which I completed in just under 12 hours including an extra hour for going over Castle Crag and High Rigg.

This is a really nice little route across the Lakeland fells.  The main problem is arranging transport since you start from Broughton Mills, probably early in the morning and public transport isn't too great to get there.  You're best off persuading someone to give you a lift or to support you.  That's the crux of the route really - after that its a pleasant trot over the Dunnerdale fells as a prelude to Coniston and then the central fells before winding down with the High Spy-Cat Bells ridge into Keswick.  A great day out if you can sort out the transport!

Not as exciting as it sounds, but a good day out nevertheless.  The 'Roman Romp' runs from Penrith Castle to Kendal Castle, passing by Lowther on the way.  Its a journey of some 35 miles that takes the old Roman road over High Street and finishes with more gentle scenery by Potter Tarn and the River Kent.  The day starts with a quick jog to Oxenholme station from whence the train whisks you to Penrith for the return journey by the high road.  Just make sure the wind's in the right direction or you'll be facing into it the whole way!  Most of the route is very runnable, so you won't be doing much walking.

I've compared the challenges that I've completed in a table which you can download below:
Lakes and Wales
Scotland